Hey, Hey!!!  So last weekend the man, the myth, the Legend from ME (nope, not Tim Holland…) Brzowski was crashing in the BPT with yours truly for the 3 day “Tour Du CT”; Danbury, Bridgeport, Waterbury…Maaannn was it crazy!!!  No lie, we were chilling Like Woe…I found out that he just got a feature in usgmag.com so I said to myself, “Well heck he’s the homie, so I better do my part to get this out there.”.  Hopefully the friendly peeps @ usgmag.com (tiiightsauce site, you should check it out aaand get on their mailing list, waaay more organized than some…other sites…Wiiink!) won’t sue me for jacking their content.  But we’ll light that firecracker when we get to it I guess…Without any more pomp and circumstance here’s the fantastic article about Brzow and a HILAROUS video he did for Nobs & Dez as well.  Enjoy!!! 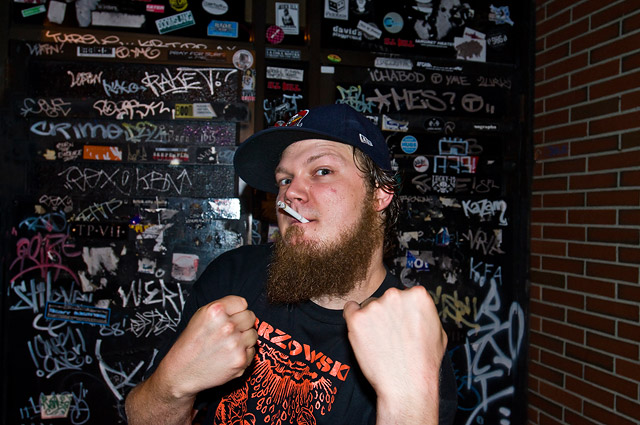 I once booked a show for Brzowski in a scummy basement in Reno, Nevada. I never thought that some 3000 or so miles later, I would wind up being almost neighbors with him after I moved to Boston. He’s quickly become one of my favorite emcees and live performers in New England and also a friend. After several attempts, I finally got to ask him a few questions on the heels of a European tour and a new release with fellow Portland ME artist Moshe entitled Like Woe. I present to you the man, the myth, Brzowski.  For full article check Usgmag.com…

My Tweets
Join 2,453 other followers